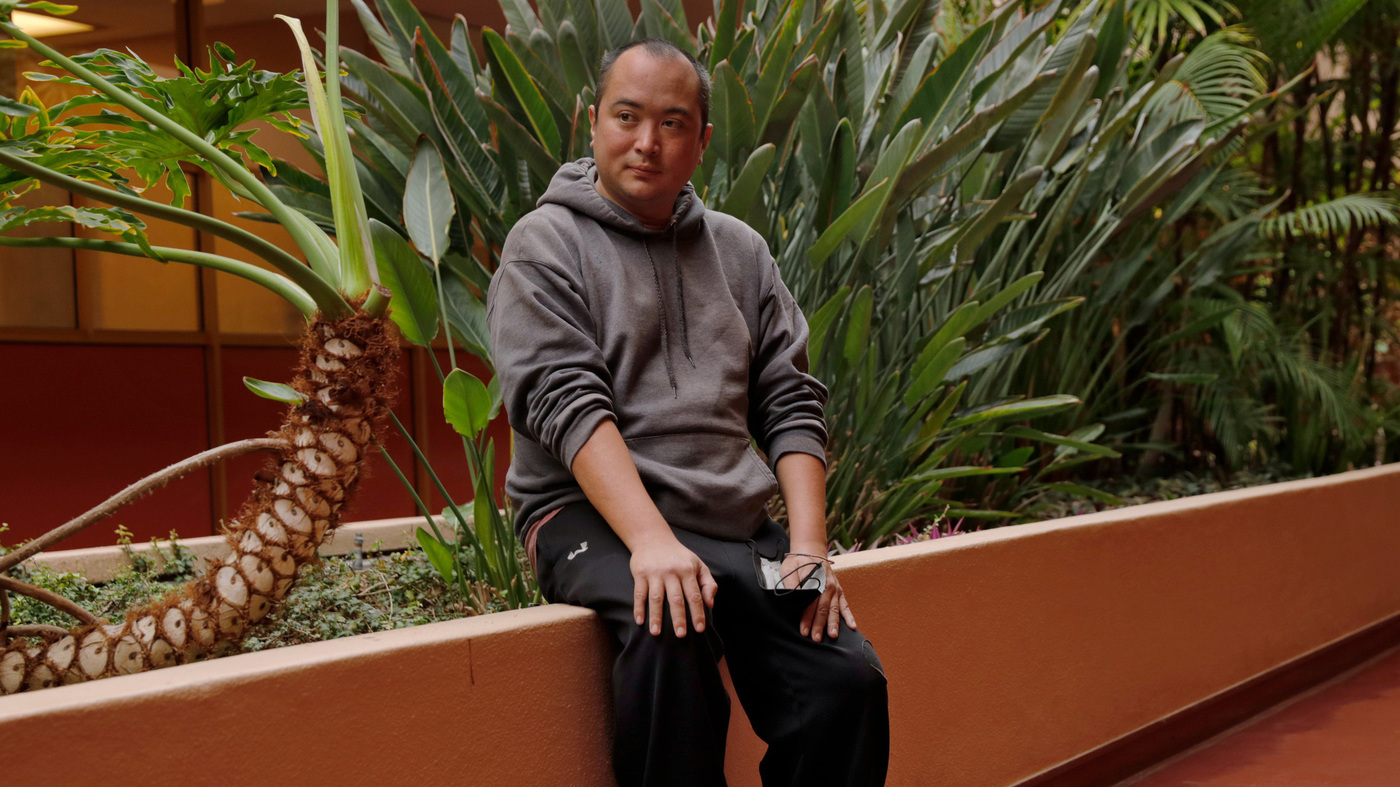 In his 20s, with the hopes of becoming a foreign correspondent, Kevin Dawes – now 39, at the Marin Civic Center in San Rafael, Calif. – traveled to Libya and then Syria where he was arrested, imprisoned and tortured.

In his 20s, with the hopes of becoming a foreign correspondent, Kevin Dawes – now 39, at the Marin Civic Center in San Rafael, Calif. – traveled to Libya and then Syria where he was arrested, imprisoned and tortured.

Maybe you’ve heard of Kevin Dawes. He was an American freelance photographer who was locked up in a Syrian prison in 2012. He became headline news 3 1/2 years later when he was released with the help of Russia.

Maybe you just remember that he survived because so many foreigners met a gruesome end in the charnel house of Syria. Islamic State militants killed publicly, beheading Western journalists and humanitarian aid workers for a ghastly media strategy.

The Syrian regime of President Bashar Assad has taken thousands of detainees without official acknowledgement and “disappeared” them in the torture chambers of the country’s prison system.

Dawes has not spoken publicly about his ordeal until now.

It’s actually the story of two men who met in a notorious prison in Syria’s capital, Damascus, and the pact they made.

The Syrian regime didn’t acknowledge holding Dawes until another prisoner, a British orthopedic surgeon, got word out that an American was being held in the dark. Dawes believes the British doctor who named him was killed because of the revelation. Now, five years after his release, Dawes is taking legal action against Syria over his imprisonment and mistreatment. But that’s getting ahead of the story.

In the spring of 2016, the State Department publicly thanked Russia for its assistance in Dawes’ release. The Russian government — which supports the Assad regime — scolded Dawes in a statement for “entering Syria illegally” and warned him about going back: “We hope he doesn’t put himself in a similar situation again and that Washington will appreciate Damascus’ gesture.”

At the time, his unexpected release spurred hope for another U.S. citizen who “disappeared” in Syria: Austin Tice, a freelance journalist who had previously served in the U.S. Marines.

An FBI website notes that Tice was “kidnapped in Damascus” in August 2012. The Syrian government has never acknowledged detaining Tice. U.S. officials believe the government or an affiliated group still holds him.

After releasing Dawes, in April 2016, Syria is not known to have freed additional American prisoners or acknowledged holding any.

Kevin Dawes says he has been homeless for the past three years and struggles with the physical and mental aftermath of horrific torture. “I have permanent nerve damage in at least one foot, and both my wrists.”

He lives out of his car

When reached by phone a few weeks ago in San Francisco, 39-year-old Dawes answers from his car in a parking lot. He says he has been homeless for the past three years and struggles with the physical and mental aftermath of horrific torture.

“I have permanent nerve damage in at least one foot, and both my wrists. As far as being permanently disabled, I don’t know, but everything does seem harder,” he says.

He describes his chance alliance with Abbas Khan, the imprisoned British citizen, an orthopedic surgeon.

In the winter of 2012, they were both held at a Syrian military intelligence detention center known as Branch 235 or the Palestine Branch. Their cells were adjacent and underground, with no daylight, Dawes says. He could only hear Khan’s brutal treatment. “They would scald him with hot water and beat him,” he says.

Pro-reform supporters, waving Syria’s pre-Baath old national flag, protest outside the Arab League headquarters in the Egyptian capital Cairo, where a ministerial meeting on Syria was held on Nov. 24, 2011. The Arab Spring protests of that year drew many activists, advocates and journalists to the region.

They were drawn to the Arab Spring

In 2011, both men were drawn to the urgency of the Arab Spring wave of protests and uprisings against authoritarian rulers that swept the Middle East.

Khan wanted to “make a difference,” recounts his sister Sara Khan from her home in London. Her brother, then 30 years old, the father of two, had recently finished his medical training at King’s College London. He was moved by the medical crisis for wounded Syrian children.

While Dawes was imprisoned in Syria, he made a pact with another prisoner, British doctor Abbas Khan: whoever gets out first gets news out of the one left behind.

“He went out in August 2012 to work in field hospitals on the Turkish border. It was something he was passionate about,” says Sara Khan. By November, restless and without consulting his family, Khan crossed into Syria to work at a rebel field hospital near Aleppo.

“He got in on Nov. 20,” his sister recalls, “he was arrested on Nov. 22, but within those 48 hours, I believe he worked at four different field hospitals and performed over 20 surgeries.”

Dawes’ journey began a year earlier, in Libya. He joined a band of freelance journalists, adrenaline junkies and medics.

“I thought I would show up with a camera and go all the places that nobody else did and indeed I found I could,” he recounts as his motivation for a self-funded trip to an active battle zone.

“I broke many rules and was not well-liked.”

Professional journalists were wary of him, decked out in battle fatigues and wraparound sunglasses. He posted hundreds of Libyan civil war videos on YouTube.

“He was a misfit,” says André Liohn, a Brazilian photojournalist who met Dawes in Libya. He says he was disturbed by Dawes’ shifting roles — a part-time photographer and a self-taught medic and, as Dawes told NPR in an interview in 2011, he even fought with rebels for a few weeks.

Syrian men gather amid the rubble of the Nur al-Shuhada mosque, which was shelled by forces loyal to Syrian President Bashar Assad, on Oct. 17, 2012, in the Shaar district of Aleppo.

When the Western media moved on from Libya to Syria, Dawes moved, too. In October 2012, he checked into a hotel in the Turkish border town of Harbiye. Dawes then crossed into northwestern Syria, lugging a helmet, bulletproof vest, medical supplies and unfounded hope that his luck would hold.

Soon after, Dawes was captured by Syrian regime loyalists at a checkpoint. Hooded and handcuffed, he was quickly transferred to a prison in the Syrian capital where his interrogations were constant and cruel, he says.

“Well, let me see if I can imitate my interrogator. ‘You are CIA! Who runs you!’ He would yell. And they would beat me.” He heard the same treatment when Khan arrived in the adjacent cell.

These two desperate prisoners, who could only whisper in the dark, made a pact: whoever gets out first gets news out of the one left behind. “You see, the Syrians were concealing the fact that they were holding me at all,” Dawes says.

Khan got the first opportunity to tell the outside world about Kevin Dawes.

The doctor’s family was determined to find Khan. They reached out to pro-regime Syrians on Facebook and learned that the doctor was alive and imprisoned in Damascus. His mother, Fatima Khan, even went to Syria to see him.

Remarkably, when she visited Damascus in July 2013 and presented herself to Syrian officials, they allowed her to speak to her son in prison and even to observe his court hearings. She visited several times that year.

“We had every sign to say they were going to let him come home,” Sara Khan says.

The Khan family also communicated with British lawmakers and officials thought to have connections with the Assad regime, the sister says. It was a very public campaign to save a humanitarian activist.

And Abbas Khan kept his word. He told his mother about the American captive in the cell next door and urged her to alert U.S. officials, according to Sara Khan. “We got a call from the FBI soon after that and we told them what we knew,” she says.

Abbas Khan wanted to “make a difference,” says his sister, Sara Khan. When he was 30, a father of two, and recently finished medical training in London, he was moved by the medical crisis for wounded Syrian children.

“They put me in a lit cell as opposed to the pitch-black lice dungeon I had been kept in until then,” he says. “I owe Abbas a lot.”

However, Khan’s treatment got much worse. In December 2013, his mother was invited to Damascus, Sara Khan recounts. “My mom said she got a call saying, ‘Come to this particular building. Your son is being released.’ So, my mom got dressed up,” she says.

Sara followed her mother’s steps on an open cellphone line. “She’s bought gifts for everybody. Flowers. She’s got biscuits, chocolates, everything. A man comes out in a white lab coat and says to her, ‘I need to give you my condolences,’ and she’s like, ‘I don’t understand.’ “

Sara takes a long pause, as if the events are as fresh as yesterday. Then she continues, “And they are like, ‘Your son killed himself this morning.’ And she got into this sort of catatonic state of shock.”

Syrian government officials claimed Khan was depressed and hanged himself, which makes no sense to Dawes. “In these cells, there was no way to hang yourself, nothing to hang yourself on,” he says. “He had no reason to commit suicide. He was going home.”

Kevin Dawes recently filed suit against the Syrian government in the U.S. District Court in Washington, D.C. He will also be a witness if Abbas Khan’s family files its own lawsuit.

Khan’s body was sent to Lebanon and then eventually shipped home to Britain. In October 2014, following an official British inquiry, according to British news reports, a jury said the medical cause of death could not be ascertained but it concluded: “Dr. Khan was deliberately and intentionally killed without any legal justification.”

Khan’s story has inspired others to study medicine.

And Dawes is suing Syria

On Oct. 15, 2021, Dawes filed suit against the Syrian government in the U.S. District Court in Washington, D.C. He seeks compensatory damages for alleged torture, false imprisonment and other abuse at the hands of Syrian officials, according to the court filing.

The Syrian government has not responded to the lawsuit nor to NPR’s request for comment. However, even if there is no response, Dawes is eligible for compensation from a U.S. fund set up in 2015. “It’s created an opportunity for the victims of this horrible, horrible nightmarish treatment to actually get some kind of compensation for what they suffered,” says Dawes’ lawyer, Kirby Behre.

The Khan family plans legal action against the Syrian regime, too. Dawes would be a key witness. “Kevin’s testimony is the only one we have in terms of actually somebody seeing him or actually hearing him being interrogated,” Sara Khan says.

Dawes, who was drawn to the Middle East to launch a journalism career, will have his most important reporting role in U.S. and British courts.