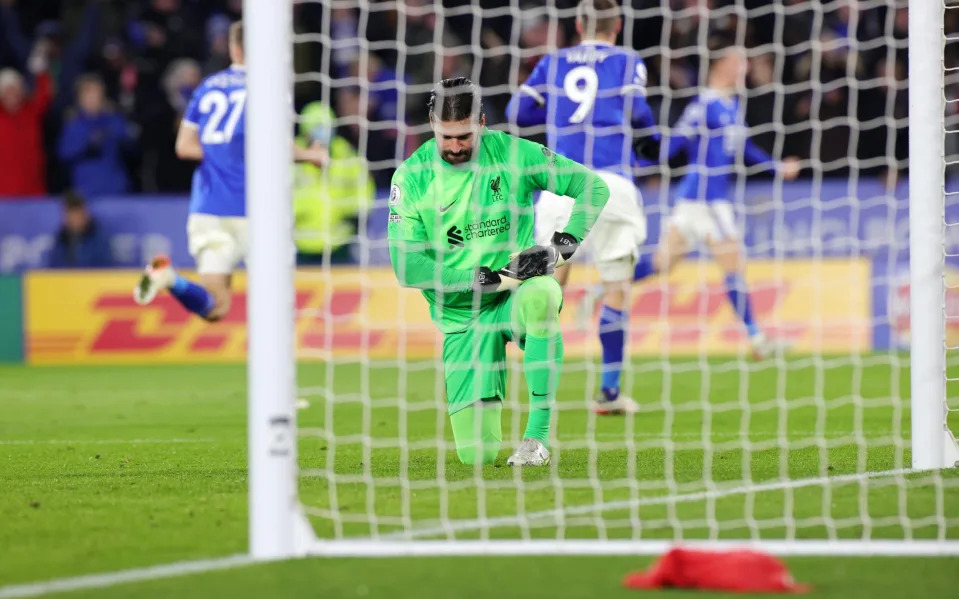 There was a time in a title race when a sloppy performance could be considered a minor setback. In the era of Manchester City, losing ground tends to be the signal for focusing on staying in the top four and concentrating on the cups.

That is the reality Jürgen Klopp and Liverpool are dealing with after an optimism-sapping defeat at Leicester City. Such are the standards – so great is the pressure City exert with their habit of casually winning a dozen or more league games in succession – that there is already a sense that Liverpool and Chelsea will be sharing a pint in that last chance saloon when they meet at Stamford Bridge this weekend.

Klopp knows it from painful experience, which partially explains why he was so downbeat after losing ground on Tuesday. Three years ago, Liverpool’s 97 points were not enough to win the title. They lost one game, making them the most unfortunate runners-up in English football history. After 19 games, Liverpool are now on course for 82 points in this one. That tally would have won the Premier League in eight of the last 28 years. In 2022, it will mean the title race is over by the end of January and prompt lengthy appraisals as to where it has all gone wrong.

Klopp has often spoken about Liverpool’s need for perfection to keep pace with City. It is a tribute to his side that so often their performances have flirted with it, his press conferences often a vehicle through which journalists can pen tributes to the latest star in a rich run of form. That also means there is surprise and a harsher focus when levels drop, as they did at the King Power Stadium.

As with the recent draw at Tottenham Hotspur and Liverpool’s last defeat at West Ham, even though they were below their best, they could have escaped with more points. Mohamed Salah’s penalty miss was critical, as was Sadio Mané’s sitter. It was the first time in nine months Liverpool have not scored in a league game.

In their previous away game, Alisson’s misjudgement at Spurs ensured Son Heung-min scored a 74th-minute equaliser. At West Ham, the keeper was culpable for the first set-piece goal which set the tone of the game, and he ought to have done more with the strike with which Pablo Fornals put his team ahead. After Tuesday, questions must be asked about how the keeper was beaten at his near post, albeit Ademola Lookman should never have been allowed the time and space to shoot by a retreating defence. When off colour, title winners tend to find a way of avoiding defeats by minimising mistakes. Liverpool compounded the loss of intensity and rhythm Klopp referenced by making individual errors.

To point the finger at Alisson is brutal. At Spurs, for example, he was Liverpool’s best player until the equaliser. Name the five best keepers in the world, and Alisson is probably one of them. Name the signings who helped change the course of Liverpool’s history under Klopp, and again he is on the list. With nine clean sheets in the Premier League, he is engaging in an annual battle with Ederson for the Golden Glove. Being the greatest of keepers at an elite club demands doing relatively little exceedingly well. Alisson has done that at Anfield better than anyone since Ray Clemence, but it may be no coincidence that after understandable troubles last season Liverpool recently added the Brazil national team’s goalkeeper coach, Claudio Taffarel, to their backroom team. It is a reassuring sign that Alisson recognised the importance of striving to improve, and the club did everything to satisfy their No 1’s request for assistance.

In many respects, Alisson is a symbol as to why it is so difficult to be overly critical of this Liverpool side for losing its second game in 29 Premier League fixtures – and only their second in all competitions this season. Alisson, Virgil van Dijk, Salah and Mané have set their own rules of excellence by performing so well for so long that the bar is set higher. Where others are open to criticism for bad months or bad seasons, Liverpool’s stars find themselves open to scrutiny for a bad moment – flapping at a corner, failing to close down an advancing attacker, hitting over the bar from 10 yards or missing a penalty.

Beyond the two defeats, the careless dropping of points away at Brentford and home to Brighton earlier this season always had the potential to bite later. So it has proved. The small details become a large package when your rivals rarely slip-up. City, like all perennial title winners, have the capacity to win whether they are brilliant or not. Liverpool had that in 2019 and 2020, too.

This season, it feels like Liverpool’s best has been as good as if not better than those seasons. The “problem” is they have generally had to be at their best to win.

For the title race to have any jeopardy beyond January, Klopp’s side will have to re-acquaint themselves with the art of victory when being far from perfect.