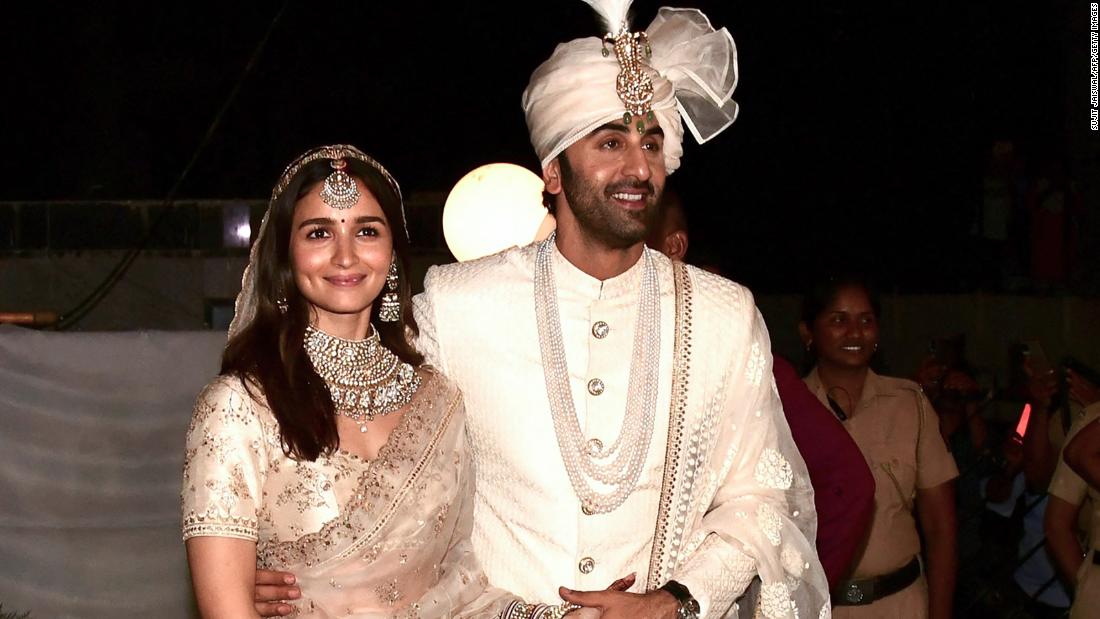 Two of Bollywood’s biggest stars, Alia Bhatt and Ranbir Kapoor, tied the knot in Mumbai on Thursday in an intimate ceremony attended by some of the greats of Indian cinema.

In one of India’s most hotly anticipated celebrity weddings of recent years, the Bollywood power couple cut cake and raised a toast to their marriage at the Vastu building, where they both own individual apartments. The couple wore outfits designed by Sabyasachi, a household name in India.

Pre-wedding festivities began with a traditional Hindu ritual called Ganesh Puja at Kapoor’s Pali Hill house on Wednesday. The house and other properties owned by the Kapoors, including RK Studios, were decked with warm lights for the wedding celebrations. A Mehendi ceremony also took place, as is customary at Punjabi weddings.

The timing of the wedding had been shrouded in secrecy, with neither star disclosing its date. But speculation about the imminent nuptials had been rife since Tuesday, when images showing Kapoor’s Mumbai home decorated with lights appeared on social media, according to CNN affiliate News-18.

Members of the media jostle for photographs and footage of guests arriving to attend a function ahead of Kapoor and Bhatt’s wedding. Credit: Rafiq Maqbool/AP

Kapoor and Bhatt are both among Bollywood’s best-paid actors, with the latter named eighth — the highest-ranking woman — in Forbes India’s latest Celebrity 100 list, which put their joint 2019 earnings at almost $14 million.

Both stars were born into families of prominent actors and directors. Bhatt is the daughter of filmmaker Mahesh Bhatt and actor Soni Razdan, while Kapoor is the grandson of Hindi cinema legend Raj Kapoor and the son of actors Rishi Kapoor and Neetu Singh.

Ranbir Kapoor rose to fame through romantic comedies like “Barfi!” and “Yeh Jawaani Hai Deewani,” in which he starred alongside Priyanka Chopra and Deepika Padukone, respectively. In 2018, he played actor Sanjay Dutt in the box office smash biopic “Sanju,” which went on to become one of Indian cinema’s highest-grossing movies.

Bhatt has meanwhile appeared in several hit films since debuting in 1999’s “Sangharsh,” including “Raazi” and “Badrinath Ki Dulhania.” Her 2019 movie “Gully Boy” was selected as India’s entry for the Best International Feature Film category at the 92nd Academy Awards.

Kapoor and Bhatt pictured at a promotional event for their forthcoming movie “Brahmastra” in New Delhi, India, in December 2021. Credit: Mayank Makhija/NurPhoto/Shutterstock

The pair recently finished work on their first joint acting appearance in the long-awaited Indian superhero movie “Brahmastra,” which is set for release later this year.

Kapoor first revealed that he and Bhatt were dating in 2018. Speaking to GQ India magazine at the time, shortly after they began filming “Brahmastra,” he said: “When I see her work, when I see her act, even in life, what she gives is something that I’m aspiring to for myself.”

2022-04-19
Previous Post: More children than ever before live as migrants or refugees, outside their birth countries – UNICEF — Global Issues
Next Post: World Economic Outlook Dims as War and Pandemic Cast a Pall