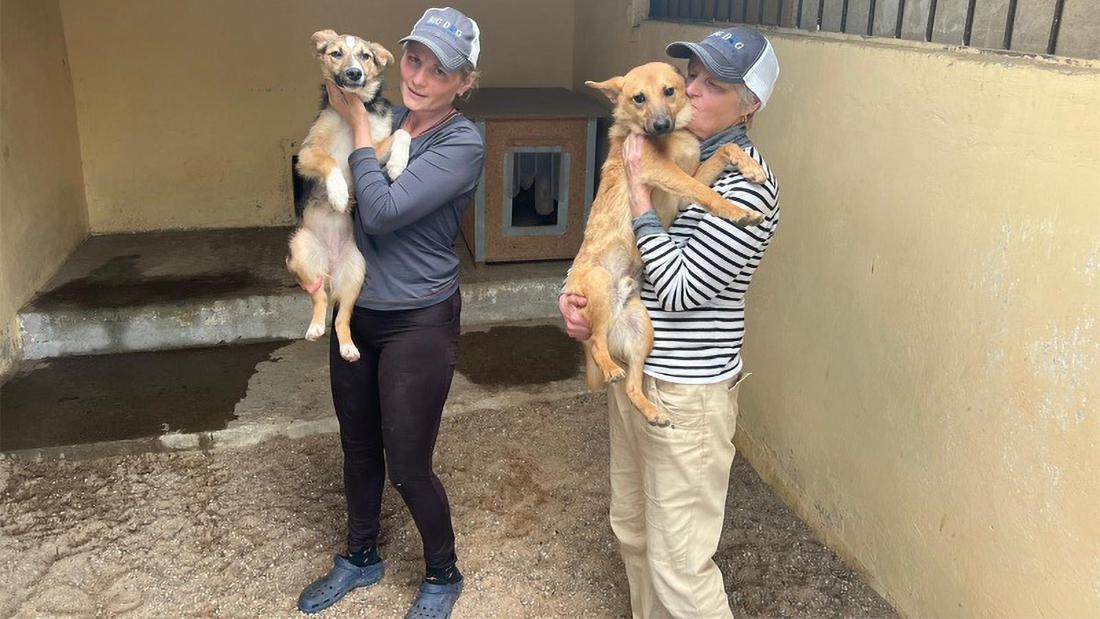 After 40 days in a bomb shelter, two Ukrainian refugees and 17 dogs are ready to start a new life in Poland

Jackson, the founder of the non-profit Planting Peace, traveled from his Florida home to Poland shortly after Russia invaded Ukraine. He estimates that he has helped find housing for some 300 refugees, including many dog owners who struggled to stay with their pets.

“If you were walking through the camps, there were just so many refugees that had brought their dogs over. And that only makes sense. It’s an extension of their family,” Jackson told CNN

Jackson learned that dogs coming from Ukraine had not been allowed to mix with local dogs in Polish shelters due to concerns about disease. So, he recently found an animal shelter sitting empty in the city of Poznan and received permission to take it over.

An overwhelmed rescue organization in Ukraine was the first to send dogs to Jackson’s shelter. A van carrying 17 dogs arrived, along with two refugees, Valerie Liscratenko and her mother, Liliana.

“When they came to us, all I knew was that they had no money and nowhere to go,” Jackson said. “And I could see right away that they were good with dogs. … I couldn’t help but notice that all the dogs really loved (them).”

He later learned that the two women spent 40 days in a Ukrainian bomb shelter caring for these dogs.

Rescuing the dogs of war

Through a translator, Liscratenko told CNN that she and her mother have a love for dogs in their blood. Since she was young, they had puppies at home and her mother would sometimes bring home stray dogs to provide food and medical care.

The day before the war started, they moved into the bomb shelter with the puppies in their care and secured some older dogs in the nearby factory where Liscratenko worked as a guard.

They would run back and forth from the shelter to the factory to feed them. But when the shelling got too intense to keep making the trip, they decided to bring the rest of the dogs to the bomb shelter.

Liscratenko said she and her mother waited for the right moment one morning — after the overnight curfew ended and before the shelling usually began — to make their final factory run. They found some dogs were too sick or injured to come with them, but they rounded up all the dogs they could and ran them back to the bomb shelter. She said after they reached safety, a bomb exploded right where they had been running.

They did not want to leave the bomb shelter, but on May 4, Liscratenko decided to go when the drinking water became contaminated, and the people and dogs there began to get sick.

They found an animal shelter in Ukraine, and the people working there had seen Jackson’s social media posts about taking in dogs coming across the border. So, they reached out to him and arranged travel for the Liscratenkos to accompany the dogs to Poland.

When Liscratenko and her mother arrived at Planting Peace’s animal shelter in Poland, Jackson said he could tell they were nervous and scared.

As refugees, Jackson said Planting Peace would have helped the Liscratenkos anyway, but because they were so great with the dogs and had a strong connection with them, he hired them to work at the shelter.

Liscratenko calls the dogs her children and says they had been through hell together and have reached paradise. She says that the people at the shelter do not all speak the same language but understand each other because it’s love that unites us.

2022-06-17
Previous Post: She Spoke Out Against Vietnam’s Plans for Coal. Then She Was Arrested.
Next Post: Putin denounces the U.S. as a declining world power.