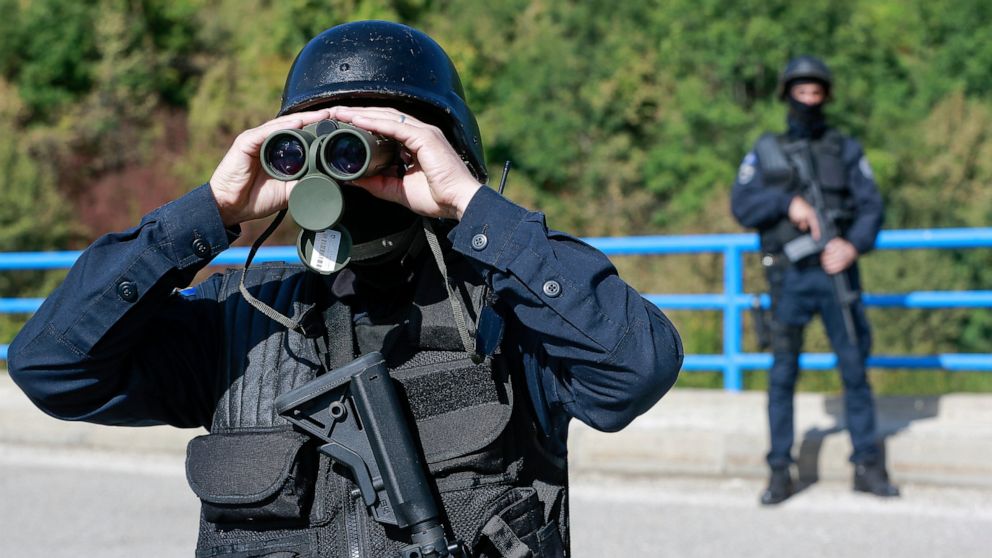 PRISTINA, Kosovo — A public building in Kosovo was set on fire and another was hit by grenades that did not explode in what government officials described Saturday as criminal acts related to ethnic Serbs protesting the decision to remove Serbian license plates from cars entering the country.

Serbian media quoted the head of the Zubin Potok fire department, Sasa Bozovic, as saying a fire that broke out overnight at the town’s municipal building engulfed two offices. Bozovic did not identify the cause of the fire.

The Kosovo Interior Ministry said the blaze burned down a vehicle registration office. Ethnic Serbs angry over the removal of Serbian license plates have blocked the Kosovo-Serbia border with trucks since Monday.

“The Center of Vehicle Registration at the Zubin Potok commune has been burned by suspects in a criminal act with terrorist elements,” Interior Minister Xhelal Svecla wrote on Facebook.

In Zvecan, a town about 10 miles away, two hand grenades were thrown into a public office but did not explode, Prime Minister Albin Kurti said.

Kurti accused Serbia’s government of “inciting and supporting” such behavior and “exploiting Kosovo citizens to provoke a serious international conflict.”

Both communes are in the north close to Serbia’s border, which is mainly populated by members of Kosovo’s ethnic Serb minority.

Tensions soared Monday when Kosovo special police with armored vehicles were sent to the border to temporarily replace Serb license plates from cars driven in Kosovo. It’s a minor annoyance for drivers with a big symbolic impact.

Serbia doesn’t recognize its former province of Kosovo as a separate nation and considers their mutual border only as a temporary “administrative” boundary.

Kosovo authorities say they are only copying Serbia’s program.

Serbian President Aleksandar Vucic has described Kosovo’s move as a “criminal action,” and he made the withdrawal of all Kosovar troops a condition of European Union-mediated negotiations to resolve the dispute.

After the grenade and fire incidents, Kosovo’s government did not sound ready Saturday to pull the special police back any time soon.

“These criminal acts best show what would have occurred with the border crossings in Jarinje and Brnjak unless special (police) forces were sent there to guarantee public order and security,” Svecla wrote.

The European Union and the United States urged Kosovo and Serbia to “immediately, without any delay” exercise restraint and refrain from unilateral actions.

A bloody 1998-1999 crackdown by Serbian troops against Kosovo Albanian separatists ended after NATO intervention, and Kosovo declared independence in 2008. It has been recognized by the U.S. and other Western nations, but not by Serbia and allies Russia and China.

Thousands of NATO-led peacekeepers, including U.S. troops, are still deployed in Kosovo, trying to stave off lingering ethnic tensions between majority Kosovo Albanians and Kosovo Serbs.

2022-08-12
Previous Post: A 1,300-Pound Walrus Could Be Killed if She Endangers the Public
Next Post: Russia’s Economy Contracts Sharply as War and Sanctions Take Hold