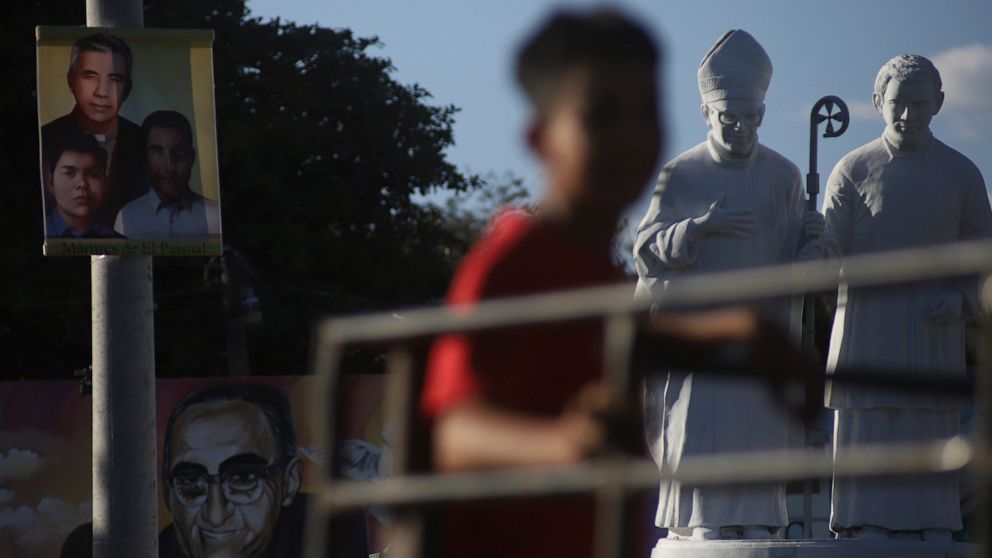 The Rev. Rutilio Grande, a Jesuit priest killed alongside friends Manuel Solorzano and teenager Nelson Lemus on March 12, 1977, was known for his ministry to the poor and was an inspiration to St. Óscar Romero, the then-archbishop of El Salvador who himself was murdered three years later.

Franciscan priest Cosme Spessotto, an Italian who arrived in El Salvador in 1950, was shot dead while praying at the altar of his parish by Salvadoran soldiers on June 14, 1980. He was known for his work in one of the poorest parts of El Salvador and his unwillingness to leave even in the face of death threats.

Pope Francis’ envoy, Cardinal Gregorio Rosa Chávez, called the four models and an example to all.

Crowds of the faithful gathered around yellow and white Vatican banners and portraits of the four.

Pope Francis has long spoken of his admiration for Grande and Romero, who he declared a saint in 2018. Francis is the first Latin American pontiff and first Jesuit pope.

Beatification means a deceased person has performed at least one miracle; a second can lead to sainthood.

Grande was 49 years old when he was killed as he drove with Solorzano and Lemus along a rural highway in Aguilares, north of the capital.

Last year, Pope Francis approved a decree proclaiming Grande, Solorzano and Lemus martyrs for the Catholic faith. That means they can be beatified without having to have a miracle attributed to his intercession.

At the entrance to his room at the Vatican hotel where he lives is a piece of cloth with Romero’s blood on it and notes from a catechism teaching Grande delivered.

“I was a devotee of Rutilio even before coming to know Romero better,” Francis told Central American priests during his visit to Panama in 2019. “When I was in Argentina, his life influenced me, his death touched me.”

“He said what he had to say, but it was his testimony, his martyrdom, that eventually moved Romero,” Francis said. “This was the grace.”

Romero was shot by a sniper March 24, 1980 while he celebrated a Mass for terminal cancer patients in a hospital chapel. Days earlier he had asked military in his homily to stop the repression.

“Father Tilo,” as Grande was known, helped organize the poor, which landowners in the area saw as a threat to their power.

Solórzano, a 72-year-old resident of Aguilares, was close to Grande and often accompanied him during his pastoral work in an area that later became the site of heavy combat between the army and guerrilla forces.

Lemus, the 16-year-old riding with the men, was the oldest of eight siblings and was in the 7th grade when he was killed.

Three years later, Spessotto was killed while praying at the altar of the parish he had led since 1953.

Anonymous notes had been slipped under the door of his office warning him to leave or be killed and telling him that he was next. But Spessotto, always refused to go, even when his family in Italy urged him to leave.

He refused to let the San Juan Nonualco church be taken on multiple occasions by both government and guerrilla forces. When the army captured members of his congregation he would go to the army base, ask for their release and chastise the soldiers for attacks on the community.

“When the war started he had the courage to follow the path of the armed forces visiting the homes where they left dead, pray (over the bodies) and help the families with funeral expenses,” he said.

“In defense of the lives of the innocent he confronted the killers, who also killed him,” Escobar Alas said.

2022-01-23
Previous Post: Amazon stock just had its worst week since 2018
Next Post: Kiribati and Samoa under lockdown after COVID arrives on international flights : Coronavirus Updates : NPR