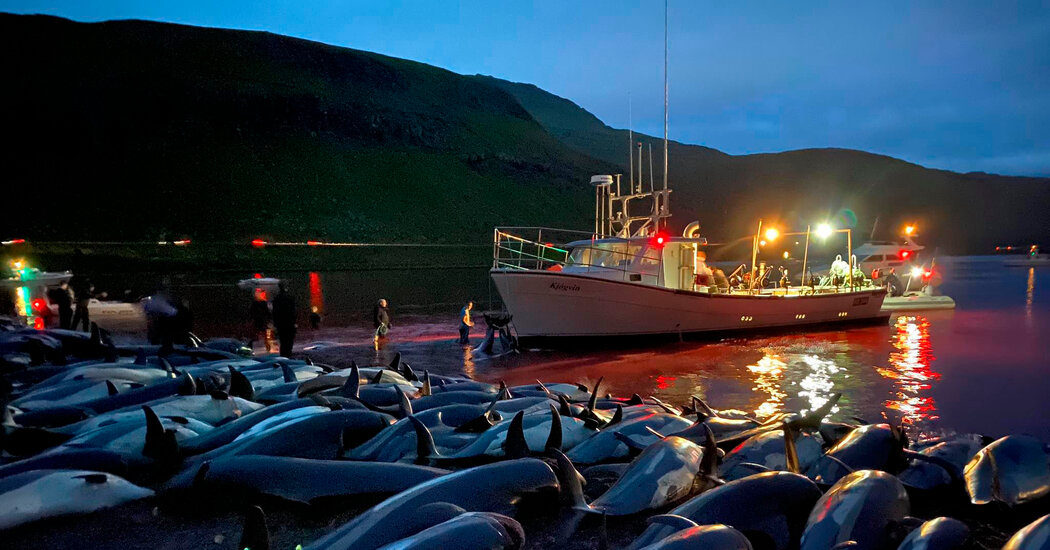 1,400 Dolphins Were Killed in Faroe Islands. Even Hunting Supporters Were Upset.

“They are smaller, and the amount of meat for the drive is not that big, so it’s nothing to use energy and time on,” he said, adding of the large kill: “You can say generally nobody was pleased about this.”

About 265 white-sided dolphins are hunted a year, he said, and about 130,000 dolphins remain in the North East Atlantic region. An average of 600 whales are caught each year out of a population of about 100,000 around the islands, according to the Faroese government.

Sea Shepherd criticized the hunt as having been called without proper authority, and said that participants did not have a license to quickly kill the dolphins, as would typically be done. The group also said that images of the dolphins suggested that the animals had been run over by motorboats.

Jens Jensen, a district sheriff for the region, said that his authorization of the hunt had been delayed because he had been hiking in the mountains. He said that given the large number of dolphins involved, he had approved the use of knives — which do not require a license — to more quickly kill them.

The hunters on Sunday had been searching for whales, Mr. Jensen said, and when they spotted the pod, they initially thought it was 200 to 300 animals. They decided to drive them to a bay at Skalabotnur, he said, noting that it was difficult to estimate the size of pods during a hunt.

“When they considered it to be over 1,000, they stopped killing the dolphins,” he said.

But critics said that while local hunting for meat remains up for debate among anthropologists, Sunday’s killing was an outrage.

“This atrocity requires our voices raised in protest,” Barbara J. King, an anthropologist and emerita professor of anthropology at the College of William and Mary, said on Twitter. “This isn’t local custom and it’s not a mere ‘error’ of scale. The devastation to #dolphin families is and will be immense.”

2022-06-18
Previous Post: Deaths of Russians In Ukraine Are Veiled in Secrecy
Next Post: Boris Johnson’s wish to pick fights with his old enemies risks making the UK a pariah